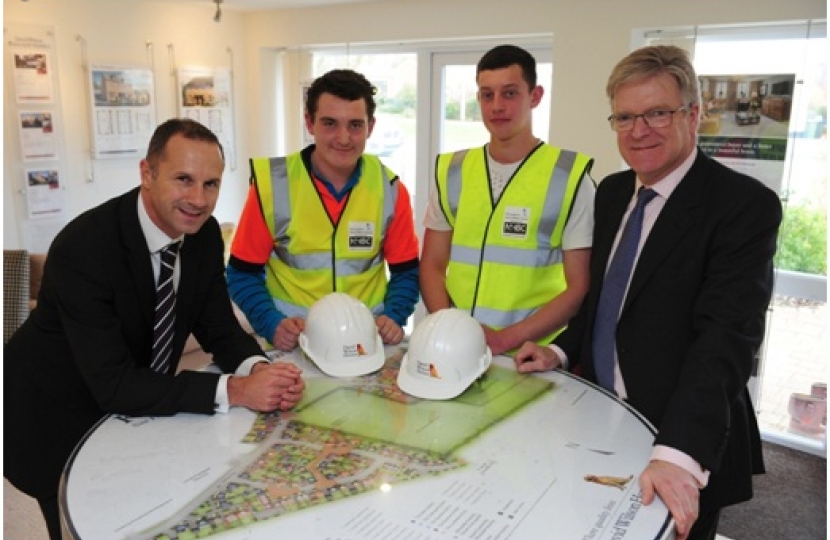 When complete Kibworth Meadows in Leicestershire will provide 472 three, four and five bedroom homes.Danny and Connor gave Sir Edward a taste of life on a building site to help demonstrate how development projects lead to training opportunities for local young people.

Sir Edward Garnier said, “This was a chance to listen to workers of varying experience in the housing industry, and also to learn about the latest advances in building new homes. David Wilson Homes’ apprentices are learning the skills that we need to help Kibworth grow.”

Thanks to recent growth in the home building industry, David Wilson Homes East Midlands is looking to employ at least 10 new apprentices by September of this year.

Connor Wickwar (18), an apprentice bricklayer from Leicester studying an NVQ Level 2 in Bricklaying at Leicester College, said, “I’m really enjoying the work and am learning a lot at the site and at college. I hope to continue doing this in the future.”

Recently named a Top 100 Apprenticeship Employer at the National Apprenticeship Awards, David Wilson Homes has a record of recruiting young people to the business, and in the past year alone has created 3,000 new jobs nationwide.

John Reddington, Managing Director for David Wilson Homes East Midlands said, “We endeavour to recruit trade apprentices at all our developments and strongly believe that our role isn’t just to build new homes but to provide employment and establish strong communities too.”

Kibworth Meadows is a community of three, four and five bedroom family homes just south of Leicester in the pretty village of Kibworth, which has great local shops, sought-after schools and an award-winning Italian restaurant. Prices at Kibworth Meadows start at £211,995.

David Wilson Homes has been building high quality properties throughout the East Midlands for the past 50 years. As a well-established homebuilder, the company prides itself on creating exceptional homes in the finest locations and recently achieved the maximum five star homebuilder rating run by the Home Builders Federation for the fourth year running.

To find out more about apprenticeships at David Wilson Homes please log on to www.buildingcareerstogether.co.uk

For more information about the homes for sale at Kibworth Meadows call 0844 811 5544 or log on to the website at www.dwh.co.uk for full details. You can also visit the development, which is open from 10.30am to 5.30pm, seven days a week, and be shown around its professionally designed showhomes.

2) David Wilson Homes is part of the Barratt Group, which sold 13,663 homes in the year to June 2013, making it the biggest housebuilder by volume in Britain.

4) In 2013, site managers working for Barratt Group won a record breaking 102 awards for quality workmanship in the NHBC Pride in the Job Quality Awards. This is the highest number ever won by a single company since the competition began in 1980.

6) Barratt Group is the only housebuilder to provide a five year warranty on the fixtures and fittings in its new build homes at the time of purchase.