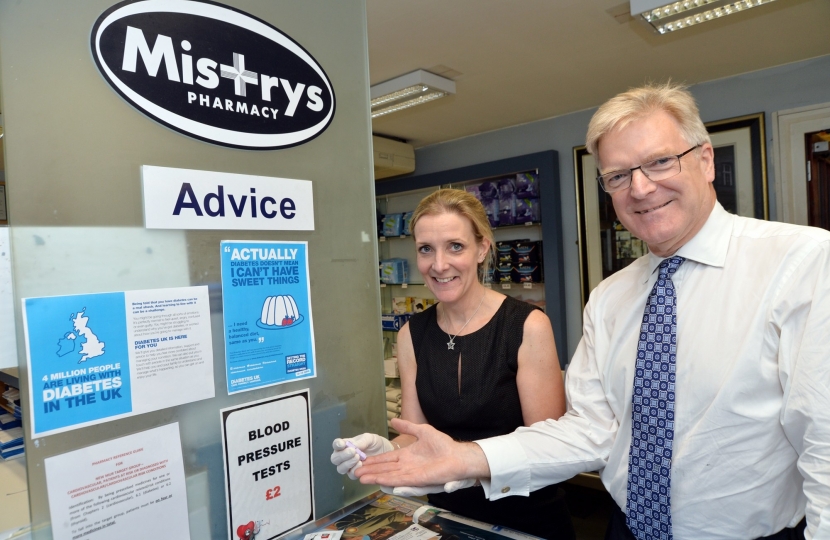 The All Party Parliamentary Group for Diabetes, led a national campaign for Diabetes Week, which saw community pharmacies across the country carry out diabetes testing.

Pharmacies across the country were nominated by their local MPs to carry out diabetes testing during Diabetes Week from 12th-18th June in an effort to increase diabetes awareness and aid easy access to testing for patients. Mistrys Pharmacy in Harborough was nominated by local MP Sir Edward Garnier to participate.

Diabetes has an enormous human and economic impact in the United Kingdom. A total of 4 million people have the condition and 10 per cent of the United Kingdom’s health expenditure is spent on diabetes (£10 billion).

This is why I am pleased that we have done our part in Harborough to raise awareness of diabetes by encouraging constituents to get themselves tested at their local pharmacy during Diabetes Week.”

“This year’s Diabetes Week has been enormously successful in highlighting the importance of easily accessible testing for diabetes. I am delighted that Sir Edward Garnier nominated a local pharmacy in Market Harborough to take part. Mistrys Pharmacy in Harborough has joined a host of other local pharmacies across the country that are fighting diabetes head on. ”