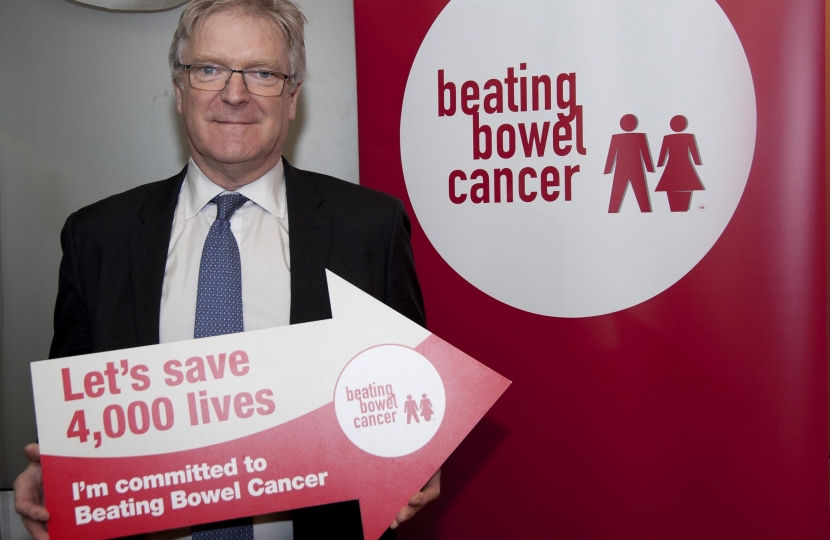 On 28 January, Edward Garnier joined other Members of Parliament, bowel cancer patients, and health professionals to hear about the charity’s plans to deliver significant improvements in bowel cancer survival rates in the United Kingdom, with the aim of saving 4000 lives during the next five years.

Bowel cancer is the UK’s second biggest cancer killer but this doesn’t have to be the case; if caught early enough over 90% of those diagnosed can survive more than five years. That figure drops to just 7% if they are diagnosed at a late stage, so early diagnosis is vital.

Edward Garnier said: “We all need to keep bowel cancer high on the agenda to ensure that the disease becomes a rare cancer killer rather than the second biggest cancer killer in the country within the life of the next Parliament. If I am re-elected at the election I will do all to make sure we to reduce bowel cancer deaths in my constituency.”

Mark Flannagan, Chief Executive of the charity Beating Bowel Cancer, said: “NHS England has announced that it wants to save 8,000 deaths from cancer over the next five years. Today’s event enabled us to outline the key policy priorities that need to be achieved if we are to save at least 800 lives from bowel cancer per year during the life of the next Government.

“We also announced that Beating Bowel Cancer will publish its own Five Year Forward View to cover the term of the next Parliament and we want it to be a challenge to do better for bowel cancer patients.

“We’re very grateful to Sir Edward for his interest in the issue and look forward to working with him in the future in order to improve outcomes for bowel cancer patients in his constituency.”

To find out more about bowel cancer please visit the charity’s website www.beatingbowelcancer.org or call their helpline on 08450 719 301.