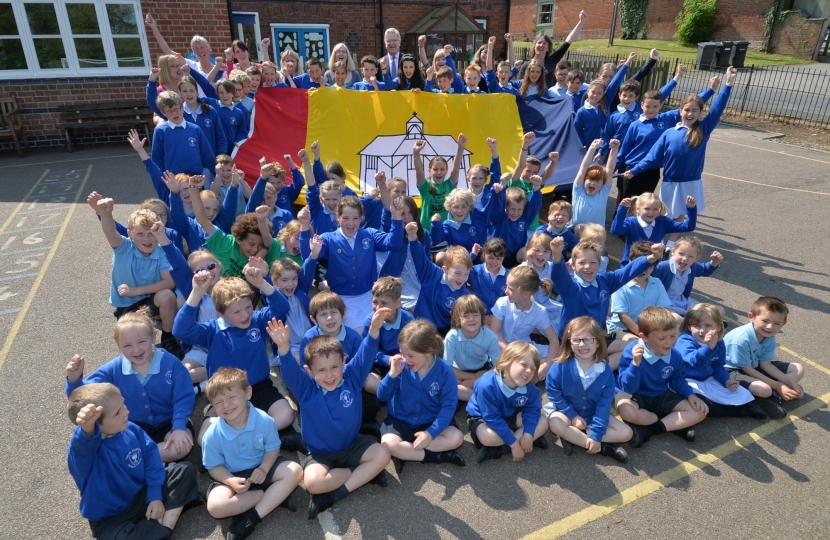 On Friday, 12 June, Sir Edward Garnier, MP for Harborough, Oadby and Wigston, presented a ceremonial flag to pupils and staff at the South Kilworth Church of England Primary School. The 12ft X 6ft flag was one of 80 designed by primary school pupils across the United Kingdom in a competition promoted by a parliamentary project designed to explain to young people the importance of elected representation in Parliament.

The 80 flags – one for each historic county in the country – were designed by 7 – 11 year olds in over 450 schools. South Kilworth C of E Primary School’s flag was selected from over 500 flags to represent the historic county of Leicestershire.

South Kilworth Primary School’s flag flew at both the national commemoration of the 800th anniversary of Magna Carta at Runnymede on 15 June, in the presence of The Queen, and in Parliament Square between 18 – 22 May to mark the recalling of Parliament after the general election.

Speaking about the project Edward Garnier said: “The 2015 Flag Project encouraged children to learn about our democratic history by designing a flag to represent their local area – drawing upon the natural environment of their area, local trades or industries, local myths, legends and history. South Kilworth School did this by incorporating reference to farming (the yellow of the flag), their school (the blue, which is the school’s colour), Foxton Locks (the red of the flag, representing the vivid colours on many of the canal boats) and Market Harborough’s Old Grammar School, built in 1614 and now emblematic of the town.

“I was delighted to have our Harborough and Leicestershire represented by South Kilworth School. When I met year some of the school’s pupils in Parliament on 1 July they were overjoyed that their flag had flown in Parliament Square close to statues of great world figures such as Winston Churchill, Nelson Mandela and Mahatma Gandhi.”

Jonathan Parsons, the flag artist commissioned as the creative lead on the project, said: “The 2015 Flag Project demonstrates not just the wonderful creativity and imagination of all the participants, but also affords a genuinely unique child’s-eye view of the entire UK in 2015.

“Through their flag designs the children have represented their local identities in a variety of imaginative ways. They have drawn upon the natural environment of their area, or its myths, legends and history. Often, they have shown a local trade or industry.

“As an artist, I know that having your creative work validated is very empowering. I hope every participant feels particularly proud of their part in this project, most especially with the flags flying both at Runnymede in Surrey, where Magna Carta was sealed, and in Parliament Square.”

The 2015 Flag Project forms part of the Houses of Parliament’s public programme, Parliament in the Making, which commemorates two important anniversaries in 2015: 750 years since the Simon de Montfort parliament (1265) and 800 years since the sealing of Magna Carta (1215).